Small-sided games are a good indication of football talent! A research review by Dan Bernardin

The use of small-sided games to asses skill proficiency in youth soccer players: a talent identification tool by K. Bennett, A. Novak, M. Pluss, C. Stevens, A. Coutts & J. Fransen in Science and Medicine in Football

Talent identification is an important component at any successful football club. It typically includes the assessment of many different characteristics including anthropometry, physical fitness, psychology and game specific skill. Game specific skill can be divided into two sections, domain-specific skill (dribbling, passing and shooting) and perceptual-cognitive skill (anticipation, decision-making and game intelligence) (1). With any assessment, ecological validity (the amount of transfer the findings of a research study have with real-life) is extremely important. It has been suggested that to assess game specific skill, small-sided games may be the best option as players execute many more soccer-specific actions in a competitive environment in comparison to match-play (2). 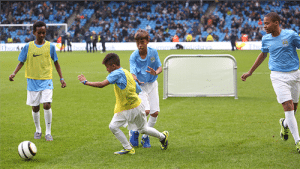 The primary aim of this study was to investigate the use of small-sided games as a talent identification tool in Australian youth soccer players.

73 players from a high-level academy (36 players) and a low-level academy (37 players) performed 4 vs 4 small-sided games for 5 sets of 3 minutes and 3 sets of 5 minutes on a 30 x 20m pitch. Retrospective video analysis was used to evaluate skill proficiency determined by the total completed involvements relative to the amount attempted.

Based on the results of this research, in order to assess a player’s game specific skill, small-sided games provide a competitive environment where players will be exposed to frequent football specific actions that will allow for the assessment of both domain-specific and perceptual-cognitive skill.

Coaches should use small-sided games with retrospective video analysis to create an environment where a player’s skill proficiency will be frequently tested to guide talent identification.

PrevPrevious ArticleAn Introduction to Triphasic Training for Football by Jamie Mackay
Next ArticleWorking in Sport? You need a Plan B! By Mick ByersNext