Protein, do I even need it? By Laura Andrews

If you talk to any nutritionist, strength & conditioning coach, personal trainer or “fitness guru” they will undoubtedly have their own opinions on protein and how much or little the human body requires. TOP that with the mainstream media popping out articles such as “Bodybuilding supplements caused the death of 25year old woman” and no wonder a lot of people are still confused regarding this macro-nutrient. Proteins are the building blocks of our bodies; they are one of the primary components in our muscles, bones, blood, DNA, hormone production and enzyme reactions. It also is an extremely important macro-nutrient which has an abundance of health and performance benefits including muscle synthesis, injury rehabilitation and helping with weight loss or body composition goals.

Recommended daily intake of protein for sedentary/non-athletes is 0.75g/kg BM, with endurance athletes requiring 1.2-1.5g/kg BM and strength athletes requiring 1.6-1.8g/kg BM (4). The reason for the higher requirements is due to the increased muscle mass, in addition to support metabolic adaptation and muscle protein synthesis, growth and repair (2). Previous protein recommendations have largely been based nitrogen balance, however, these are often flawed for methodological reasons (10) and often underestimate requirements for athletes as these studies were not focused on exercise performance. In fact athletes who adhere to lower protein diets in accordance with a nitrogen balance are at greater risk of impaired recovery from exercise and increased muscle catabolism (4). 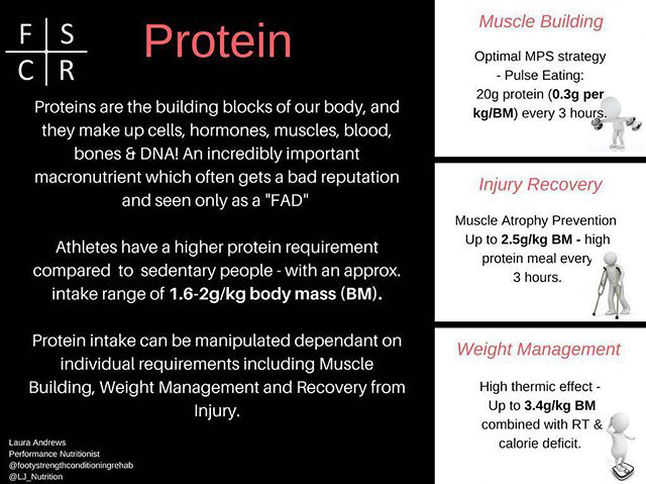 As mentioned above, I recently read an article where “bodybuilding supplements” AKA whey protein etc. were listed as the “leading cause of death” of a 25-year old female, and as such the family and media were insisting upon stricter regulations surrounding the sale of whey protein. What they FAILED to stress was that the female in question had a rare kidney disorder which meant that her kidneys were not working properly and therefore could not process the higher levels of urea – which was the ACTUAL cause of death.

A few people say to me “too much protein will harm your kidneys” and this comes from years of anecdotal evidences suggesting that due to the higher amount of nitrogen and therefore urea excretion, this would put a higher pressure on kidneys and therefore cause kidney damage. The problem is, despite this sounding like it could be correct, longitudinal research found no adverse effects of higher protein intakes in HEALTHY subjects. Martin, Armstrong & Rodriguez (6) reviewed literature and found no significant evidence that high protein diet causes any detrimental renal effects, however, reducing of protein intakes may be necessary for those suffering from an existing kidney disease.

Since Areta et al. 9 (3) in 2013, the consensus shows that the optimal feeding strategy for increased protein synthesis is a pulsing strategy whereby you consume 20-25g (0.3g/kg BM) every 3 hours post resistance training (RT). This could be as a result of previous research by Cuthbertson et al. in where they discovered that 10g of essential amino acids post RT maximally stimulated MPS, which is roughly the equivalent of ~25g of protein (10).

Preventing muscle atrophy during injury rehabilitation strategies is extremely important, which is another area in which a higher protein diet may be beneficial, particularly during periods of inactivity and/or a hypo-caloric diet. Athletes will often tend to consume a lower energy intake whilst being immobilised to help prevent excess weight gain, however, research has shown that within this state, muscle atrophy is actually accelerated (11). In 2010 Mettler, Mitchel and Tipton (7) stated that healthy male subjects who consumed a higher protein (>2.2g/kg/d or ~35% EI) diet whilst on a 60% calorie deficit, sustained a higher amount of lean muscle mass when compared males on the same calorie deficit yet a lower protein intake ~15% of EI. Murphy, Hector & Phillips (9) also concluded, by maintaining a high protein intake, between 2.3-3.1g/kg FFM, this helped to attenuate muscle mass loss during periods of calorie restriction.

Fat loss strategies which include higher protein diets are often recommended due to the higher dietary thermic effect compared to both carbohydrates and fat. Simplified, the body requires more energy to digest, metabolise, absorb and dispose of waste products (7). As a result, the total daily energy expenditure is up. Similarly, as increased protein intake combined with resistant training can increase muscle protein synthesis, this will also aid in increasing the body’s basal metabolic rate, allowing the body to burn more energy at rest.

Diets which are higher in protein can also aid weight loss as protein rich foods are more satiating (filling) compared with other foods, reducing the feelings of hunger between meals which will hopefully reduce the amount of unnecessary over-eating. This is due to high protein ingestion which has shown to increase the neurone anorexigenic and the hormone leptin which supresses appetite, whilst simultaneously decreasing ghrelin which signals for more food intake (8) A study by Antonio et al. (1) identified, subjects who consumed a high protein diet (>3.4g/kg BM) combined with resistance training, despite consuming approximately 500kcal more per day, had a lower body fat percentage compared to those who ate a moderate protein diet (<2g/kg BM).

The standard baseline dietary intake for an athlete should be approximately 1.8g/kg BM per day. And diets which are higher in protein than the standard RDA can be extremely beneficial for athletes, particularly for athletes who wish to increase lean mass or decrease fat mass, or who are on a hypo-caloric diet and/or are rehabilitating due to an injury. Individuals who have an underlying health or kidney issues should always seek the advice of a doctor or clinical dietitian before consuming a high protein diet.

PrevPrevious ArticleImprove Goalkeepers’ Wrist Strength by Dan Bernardin
Next ArticleLadies, gain an advantage over your competition and get in the gym by Dylan MernaghNext