‘Zapping the brain’ – The physiology behind the psychology of endurance performance

This blog was influenced by Alex Hutchinson’s book ‘Endure mind, body and the curiously elastic limits of human performance.’(1)

The book presents a fantastic insight into what determines success at the elite level of endurance pursuits. Despite years of research focusing upon quantifiable physical barriers such as muscle, oxygen, heat, thirst and fuel it may be the psychological component that is the most important determinant of success.

This concept is nothing new, as scientists such as Tim Noakes have long argued that the limits we encounter in exercise are imposed in advance by our brain to ensure that we never reach true failure (Central Governor Theory). This ‘Anticipatory Regulation’ considers fatigue to be controlled by a dimmer switch as opposed to an on/off switch that traditional models have leaned on. With this in mind, there may be scope to consciously override our impulses to stop, where we develop a resistance to mental fatigue. Many behaviours in endurance events support this idea such as seemingly exhausted marathon runners finding the energy for a sprint finish. This trait has been shown to be greater in elite runners compared to novices and could be due to the gradual re-setting of their ‘Central Governor’ that may have occurred through years of hard training. Undoubtably the physical alterations in the muscles, heart and lungs are vital to becoming an elite endurance athlete, yet during the years of training there will have been an equally impressive neurological set of adaptations. The mental capacity to ‘switch-off’ all thoughts on pacing strategy and disregard incoming sensations of pain have both been aligned to top level endurance athletes and are equally trainable.

Michio Ikai and Arthur Steinhaus once stated that, ‘psychology is a special case of brain physiology.’ Therefore, what alterations are happening in the brain to allow the resistance to fatigue to occur in elite endurance athletes. Imagery of the brains of cyclists during tests to exhaustion have revealed that prior to giving up there was an increased communication between the insular cortex (monitors internal conditions) and the motor cortex (issues the final commands to the leg muscles). This experiment showed that there may be a form of anticipatory regulation occurring whereby the brain knew the cyclists were about to reach their limits before the legs actually failed.

From a practical perspective, if we can supress the excitability of neurons in the insular cortex then you may turn down the insular cortex’s brake signal and in turn allow the motor cortex to keep driving the legs for longer. Alternatively, enhancing the excitability of the motor cortex and you may allow those neurons to ignore the brake signal and keep firing signals to the legs.

‘Zapping the brain’ formally known as transcranial direct current stimulation (tDCS) focuses a small electrical current over specific areas of the brain. Unlike more aggressive electrical brain stimulation approaches that cause a wider range of neurones to actually fire, tDCS aims to raise the sensitivity of the neurones so that they are merely more alert and responsive. This serves to prime the neural system very much like a potentiating effect caused by complex training in the weights room.

Typically, athletes will be exposed to 20 mins of tDCS during a warm up routine before training or competition. By stimulating specific areas of the motor cortex, researchers have been able to increase fine motor skills as well as modulating gross motor properties such as fatigue and explosiveness in human subjects. Zhu and colleagues (2) found that golfers who trained with tDCS putted significantly better than their counterparts who had a sham stimulation. Similarly, in a cycling test to exhaustion the participants who had tDCS were able to cycle on average two minutes longer than those with a sham treatment as well as rating themselves as less tired (3). Interestingly, there was no difference in physical measures (Heart Rate and Lactate Levels) which suggests that changes in brain perception drove the improved performance. Despite some limitations to the research there is some encouraging support for the use of tDCS to improve strength and power. The Halo Neuroscience company demonstrated better performance in different squatting movements (Keiser air squat, squat and countermovement Jumps) when exposed to 20 mins of tDCS and then going into their training protocol (4). This research also showed improved perceptions of recovery, where sleep quality and fatigue were significantly better after receiving stimulation.

As the field of elite sport continues to search for means to enhance performance, it is not surprising that many tech savvy sports teams are embracing the ‘Neuro-priming’ practices in their training. High profile athletes like James McAdoo from the Golden State Warriors and the US Ski and Snowboard Association being the early adopters with some success. As with any novel training modality it is key to understand the science and not be fooled by impressive marketing and easy fixes, which are usually too good to be true. Whether neuro-priming proves to last the distance or not, it is nonetheless impressive to witness such advances in neuroscience and what the physiological dissection of psychology can potentially achieve. 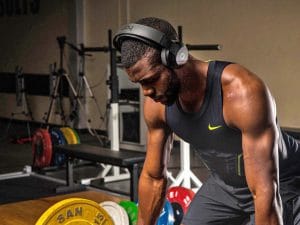 4.Halo Neuroscience (2016). A real-world investigation into the benefits of transcranial direct current stimulation to the primary motor cortex on muscular performance.

PrevPrevious ArticleThe Importance of Speed and Power for Professional Footballers: A Review of the Literature by Ian Jones
Next ArticleA Critical Review of Eccentric training and its effects on change of direction ability by Scott DalyNext