In a highly physical and psychologically demanding, results-based industry, football players are required to train and compete on a regular basis, whilst conditioning coaches strive to preserve performance, prevent injury and promote physical conditioning. However, how much do we really understand this habitual aspect of our lives and how this essential process is part of our physical and mental recovery.

Sleep. We partake in it for several hours a day, many hours a week and it is thought that if the average human lives till their 79 years of age, 26 of those will be spent sleeping and a further 7 years just trying to get to sleep. But do we really understand why this habitual aspect of our lives is required. For the elite athlete, do we pay sleep the respect it deserves or are we taking this essential process of physical and mental recovery for granted?

Somewhere in the blue light, technological evolution, weekends have been lost to work as hours have increased and the need for social connectivity 24 hours a day is now the norm. On a global scale, the human-race now ingests stimulants to keep us awake, tablets to help switch off and burns the candle at both ends with little consideration as to the effects on the body and mind. Research in recent years has demonstrated links between sleep and diseases such as obesity and diabetes (8) to showing that our brains wash away their waste toxins during sleep (55).

Before prescribing any athlete with a sleep programme, it is worthwhile that they understand circadian rhythm. This is an internal body clock that regulates our internal systems, functions and processes throughout a 24-hour period. Our bodies work in harmony with a daily timing schedule which is shown in the following figure. Circadian rhythm can be affected by both endogenous factors (light, temperature) and exogenous factors (social interaction, meals and exercise). 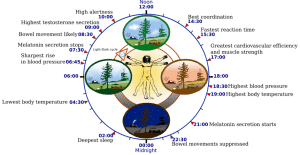 REM sleep is characterised by muscle atonia (loss in muscle tone), bursts of REM and dreaming. It is suggested that deep sleep is most important for optimum anabolic conditions and recovery. Little research is available involving athletes, however, there is evidence in support of this theory, which concludes the release of growth hormone during deep sleep is at its largest within the first hour of sleep (51), placing importance on sleep onset for recovery and growth. The figure below reproduced from Carskadon and Dement (2011) shows how recovery is maximised at varying periods of deep sleep, which interestingly seem to occur roughly every 90 minutes. 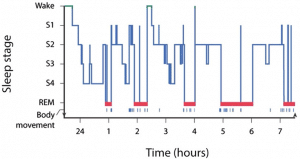 Vgontzas et al. (2004) reported that modest chronic sleep loss is associated with significant sleepiness, impairment of psychomotor performance and increased secretion of IL-6 and/or TNFα. IL-6 or Interleukin-6 is an important cytokine, mediating immune and inflammatory responses, whilst also acting as a regulator in metabolic, regenerative and neural processes (43). Tumor necrosis factor (TNFα) is a cell signalling protein (cytokine) involved in early inflammatory events which activate signalling pathways for cell survival, apoptosis and cellular differentiation (20). Of course, an increased secretion of these two cytokines indicates the body’s response to stress.

Another study into sleep loss and inflammatory markers have highlighted increases in C-reactive protein or CRP (28). CRP is the major marker of the formation of plasma proteins in response to an inflammatory stimulus, which is largely controlled by IL-6 and TNFα (10). The chronic release of such markers is supposedly predictive of future cardiovascular morbidity (29), whilst further epidemiologic studies have concluded that CRP is a predictor of both a long and short-term risk of stroke and myocardial infarction in men and women (11; 41).

Sleep has been stated as the major reason for fatigue/tiredness in both healthy adults and athletes (12). A study by Van Dongen et al. (2003) showed that sleep restriction down to 6 hours a night, was associated with a deterioration of psychomotor performance.  There is much literature available studying sleep deprivation among athletes, which suggests that sleep and recovery are pivotal to adaptation and subsequent performance (39; 45; 50); associated decreases in competitive performance and reduced levels of determination/intensity in training (40; 4); mood and cognition impairment (5, 49, 22), greater levels of fatigue, depression, and confusion (53), reduced levels of metabolic and weight management (44; 16), and significant impairment of glucose metabolism with severe sleep restriction (47). Ultimately, with the deterioration in mood, there is an impact on athletes participating in training and competition (38). Factors associated with sleep deprivation have included but are not limited to; travelling across time zones, nervous anticipation prior to competition, parenting young children and making physiological composition changes.

Comparatively, in a study by Blumert et al. (2007), they researched weightlifting performance using the snatch, clean & jerk, and front squat; and concluded that lifting performance wasn’t significantly altered after a period of sleep deprivation. Similarly, studies on anaerobic wingate performance have shown no performance decrements (6; 31; 46).  There is reasonable evidence to suggest that to witness a significant decrement in performance, a sleep deprivation period of a more substantial duration (beyond 30 hours) needs to occur. Souissi et al. (2003) reported significant decreases in peak and average power generating capacity,

whilst Bulbulian et al. (1996) reported significant decreases in isokinetic performance after 36 and 30 hours respectively. Takeuchi et al. (1985) reported that 64 hours of sleep deprivation resulted in decreased vertical jump performance and isokinetic knee extension strength. Interestingly, Reilly & Piercy (1994) suggested that performance decrements in the more skill-related tasks or the more compound exercises such as the deadlift, leg press, and bench press were greater, while there were no alterations in more isolated exercises such as a bicep curl.

Although whilst studying weightlifting performance, Blumert et al. did not find any significant performance decrements after sleep deprivation, it was concluded that measures of vigour, fatigue, confusion, total mood disturbance, and sleepiness were all significantly altered by sleep loss. Pilcher and Huffcutt (1996) also found that psychological performance variables were more notably affected within the earlier phases (<24 hours) of sleep loss. Similar decreases in psychological markers of performance were recorded by Meney et al. (1998), which suggests that individual mood state and physical application are closely associated, with extrinsic motivation being the primary driver for training and competitive performance. Overall, it appears that the greater the amount of total stress (e.g. sleep deprivation, caloric deficit, prolonged work), the more pronounced the changes in

psychological measures associated with mode states. It is possible that psychological markers are visible in advance of physiological performance markers, which may explain how performance in power or strength activities is not significantly altered in the acute phases (<24hours) of sleep loss.

When designing training schedules, coaches should be aware of the implications of the timing of training sessions on sleep and fatigue and provide countermeasures to be included into the day to support the player. Some considerations may include: