Football is said to be a game of opinions. Everyone involved in the game whether it is the fans, pundits, media, players or the first team manager has their own unique insight and experiences regarding the beautiful game. It is this subjectivity that makes football such an exciting spectacle and the most popular sport in the world. However, the human brain is naturally susceptible to making errors in judgement and decision making which can directly impact our beliefs and consequently skew our understanding of the objective truth. The presence of these psychological faults (cognitive biases) in a game that is more often than not driven by opinions can lead to an inaccurate interpretation of the game as well as being the underlying cause of many myths and misconceptions in football.

The increase in statistics in sports offers a more objective analysis of the game which provides a means of challenging common convention and keeping our cognitive biases in check. Chris Anderson and David Sally’s book ‘The Numbers Game’ (1) provides an excellent discussion around this concept and is the inspiration for this blog article.

The purpose of this article is not to disregard the value of coaching experience and individual opinions but rather to make practitioners aware of the existence of cognitive biases and the powerful impact they have upon our decisions and perceptions of the game. 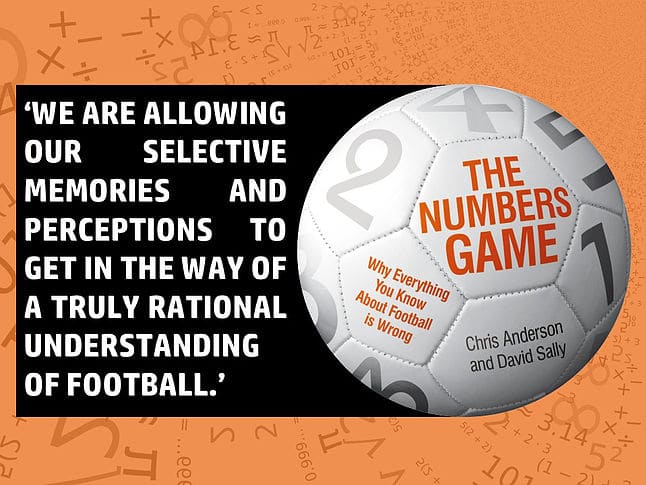 One of the greatest forms of cognitive bias in football is the ‘confirmation bias.’ This typically occurs when there is a desire to confirm one’s belief, leading us to unconsciously focus upon instances and evidence that support that belief (1). An excellent example of this is the belief that an attacking style of play that focuses on possession is the best approach to being an effective team. The recent success of Barcelona and the Spanish national team, who adopt such a style of football, are likely to be a large reason why many hold such a belief. Additionally, the pleasure and excitement that derives from watching this style of football may further justify (in your mind) that it is the optimum way to approach the game. However, when more objective reasoning is used the reality is that this idealistic style of play may not be the most effective. The evidence suggests that only two of every nine goals happen after more than three passes are strung together (1). Similarly, scoring a goal produces on average only one point per match in comparison to keeping a clean sheet which yields two and a half points per match (1). Hence, focusing upon an attacking, possession based game may not necessarily be the most effective approach. 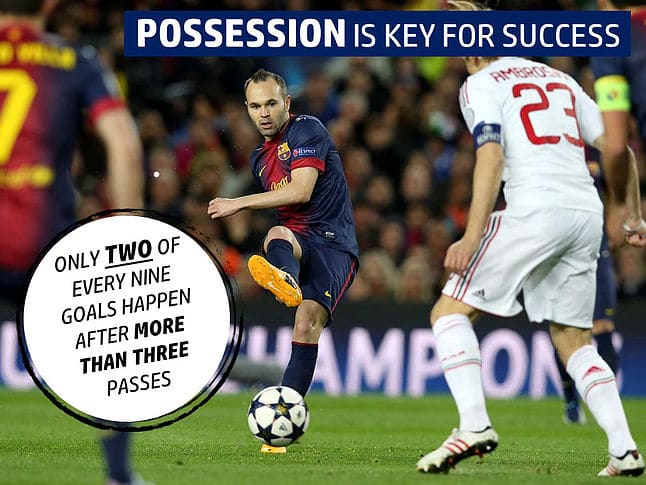 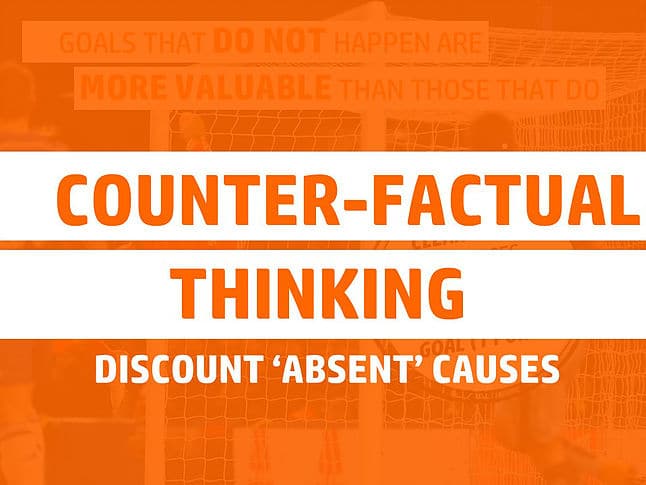 The concept of ‘counterfactual thinking’ may also be partly responsible for our obsession with scoring goals and attacking styles of play. People discount causes that are absent and place greater importance upon occasions that are visible or tangible. Hence, when we see a goal it ‘actively’ happens in our minds and we sense it more intensely whereas not conceding (clean sheet) is a far less noticeable occurrence. Yet, as described above keeping a clean sheet yields on average 2.5 points per game in comparison to scoring a single goal. Therefore, a defensive approach that is considered very negative in the football world is in reality a more efficient way to play the game. Jose Mourinho’s teams of the past such as Inter Milan’s Champions league success in 2010 very much support the effectiveness of a counter attacking style built upon a strong defensive organisation.

Interestingly, counterfactual thinking was also seminal in the release of Jaap Stam from Manchester United when information was presented that demonstrated he was making less tackles than the previous season. In reality this was actually a positive behaviour where better positioning and reading of the game resulted in less engagement with the opposition. Again, physically seeing someone make a tackle registers to the brain as more important than actually being in the right position to avoid such an event. Retrospectively, Sir Alex Ferguson has admitted that this was a regretful error on his behalf and goes to show that even the most experienced of managers can succumb to cognitive bias. 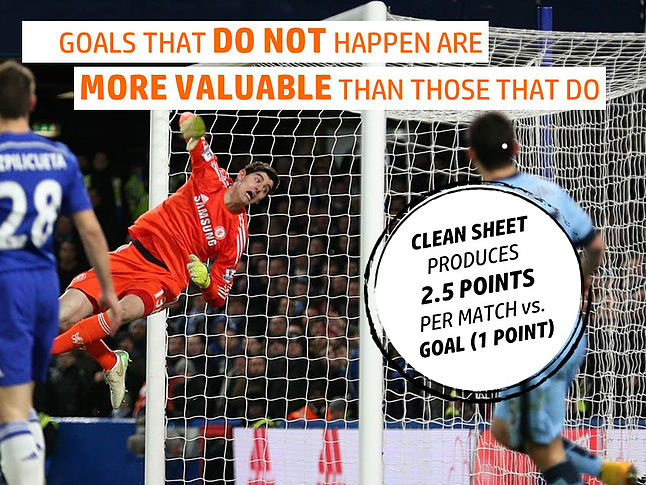 The focus upon possession as a key component to success in football is exacerbated by the influence of pundits and the media who have a tendency to over emphasise this area too much. When an idea is repeated often, we are intuitively more likely to believe it is true which is in fact just an illusion that we create in our minds. This illusion can be explained by the bias of the availability heuristic which occurs when the probability of an event that is easily recalled is overstated (2). This is in part, responsible for many of the myths and misconceptions surrounding football. An example of this is the effectiveness of set-pieces as goal scoring opportunities. Anecdotally, it is often said an offensive corner or a free-kick outside the box is a great chance to score a goal. In reality, the evidence suggests that only 11% of attempts at goal that arise from corners have been shown to produce a goal (1). Further, when a corner is played into the box a team is in fact more vulnerable to being caught on the counter and more likely to concede a goal. Hence, playing a short corner is a more effective strategy than trying to hit the ‘big man’ in the box.

The authors of the numbers game conclude that football is a game of managing turn-overs identifying the transition to be a key moment of the game (1). A surprising statistic arising from the research being that there are a greater number of turnovers in 90 minutes of football than in an entire basketball game (~380 v ~200 turn-overs). Taking this objective information and using it to build a game model around may therefore be more appropriate than going on a more instinctive, subjective approach. 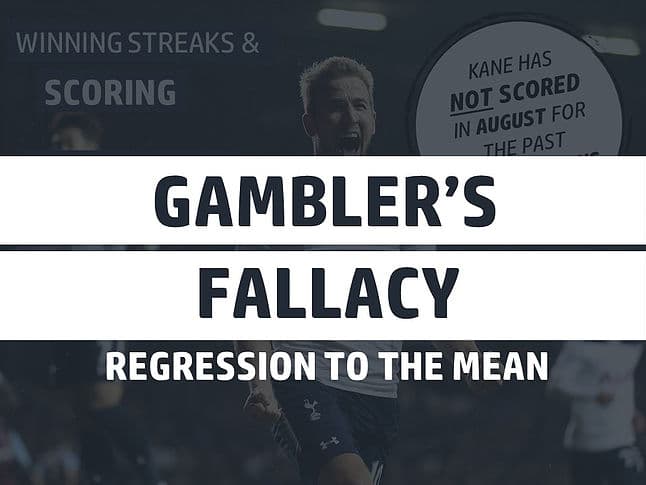 One final bias that is worth mentioning is the ‘gambler’s fallacy’.’ The gambler’s fallacy occurs when irrelevant information about the past is seen to matter when predicting future events (2). In football this is best explained when considering winning streaks and scoring droughts. Harry Kane has failed to score in August for the past three seasons and this particular season ended his drought on September 1st. The behaviour is more likely coincidental but can also be explained mathematically by the ‘regression to the mean’ where a period of extremes in one direction is likely to be followed by a period of extremes in the opposite direction. Similarly, the appointment of a new manager following a series of bad results appears to catalyse a revival in form in the same group of players and staff. 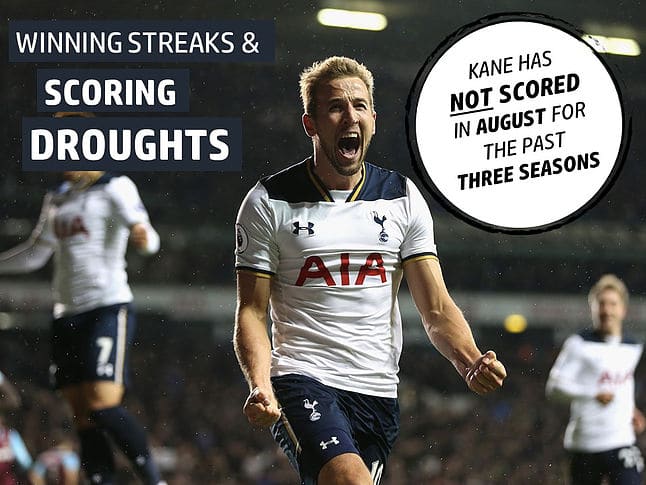 The problem with the majority of the cognitive biases mentioned above is that they are difficult to change. Many of these natural biases can be exacerbated by motivation where self-interest, social pressures and organisational context play a part in the degree of cognitive bias expressed (2). The footballing environment naturally lends itself to this type of climate and therefore practitioners need to be even more cognisant to the risks associated with the varying forms of bias. In order to avoid such complications practitioners should actively challenge current conventions with counter-facts, probe for evidence for alternative explanations (play Devil’s advocate) and surround themselves with multiple experts with different points of view and varying backgrounds (2).